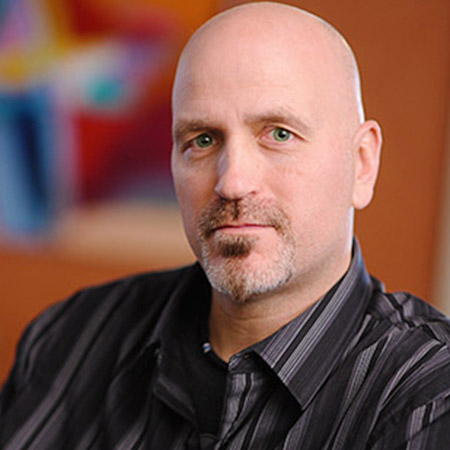 Michael has been entertaining people most of his life. At an early age, he started playing drums, acting and working on his artistic abilities. He began acting in summer theater and would later appear in TV commercials and land extra rolls in feature films. Music soon took over as his main passion and by the time he was 19, Michael was playing in front of large crowds.

In 1986, Michael would put his acting to use by combining his improvisational skills with his natural ability to mimic famous voices, such as Bullwinkle, and began making regular appearances on the Scott Paulsen Radio Show on Pittsburgh’s, WDVE. This would soon parlay into a short-lived career in doing voice-overs for radio commercials.

In 1991, Michael would get his first taste at producing music as he entered the studio to co-produce a charity song to which he penned the lyrics. Dream Makers was a local “We Are The World” type effort where he gathered musicians of all types from around the Pittsburgh area to take part in singing and playing on the song that would get notable air play as well as a Rockumentary that would air on TV. 5 years later, he was at it again. Only this time, Michael decided to produce a full-length CD of local bands performing classic rock hits. And the Power-hitters Tribute to Classic Rock was recorded and released to raise money for the United Cerebral Palsy Foundation.

To further his advancement on his design capabilities, Michael decided to attend Duquesne University in Pittsburgh to obtain a degree in Multimedia Technologies. It was here that Michael fell in love with everything related to Multimedia Design including computer animation.

In 2009, Michael formed a division of his company Atlas Design Group that was to become zoetifex Studios. Almost immediately, he got the chance to put together a demonstration of zoetifex’ animation capabilities, for a gentleman in New York who was looking for a company to produce a new TV Series based on re-hashed vintage audio. So Michael came up with the idea of taking the audio from Alfred Hitchcock’s 5 minute long trailer for his movie “The Birds”. Michael then began to build his pipeline of talented artists. People who have worked for the largest animation studios from around the world. And since January of 2010, Alfred Hitchcock Presents: The Birds (Animated Short) has now appeared in three film festivals all around the world, and has been featured on such sites as Aniboom, where it has gained much notoriety.

In the years since, Michael has been hard at work continuing to build the zoetifex pipeline, make key relationships and create new projects that will become future productions for zoetifex Studios.

Over the course of his career, Michael has worked with over 200 clients creating everything from corporate logos, brochures, print ads, web sites, TV commercials, jingles, filming HD video, visual effects and animations and more. He has worked with a variety of clients ranging everywhere from start-up companies to multi-million dollar International companies and has won several awards for his work in this field. He is the creative visionary for zoetifex Studios, and under his leadership the company continues to focus its efforts on developing high quality projects that fall under their category of Inspiritive Entertainment.

From his background in music, to acting and voice-overs, to his artistic skills and award-winning designs. He has unique, creative ideas and possesses an ability to round up the most talented people available on a moments notice. He believes, and what’s more - he get’s others to believe in what he’s doing.

“We Are The Dream Project: Dream Makers - The Rockumentary” (John McKee Productions - Pittsburgh)
Music composer and host of this Rockumentary that aired on Pittsburgh's local Fox affiliate WPGH Fox 53 in 1991.

“Sonny Days - Youngstown Shakedown II” (Crows Run Pictures - Pittsburgh)
A feature length film Directed by Tom Megalis in which Michael had a cameo role as a drug dealer (he was helping Tom out).

“Family Reunion” (Manny Moe Productions - Pittsburgh)
Writer, Producer, Director and Lead Acting Role - Short film that was created for entry into the 2013 Pittsburgh 48 Hour Film Festival. This picture recieved the second most votes from the audience as favorite movie.

“Life Screams” (Lacey Sturm - Pittsburgh)
Screenwriter, Story - Full-length, live-action movie based on the book The Reason: How I Discovered a Life Worth Living by Lacey Sturm (former lead singer of the band Flyleaf).

“The Birth of Jesus” (The Chronicles of Christ/zoetifex Studios - Pittsburgh)
Writer, Producer - A two-part story about the first Christmas, taken directly from the Gospels of Matthew and Luke.